If you have any questions or comments for us, please fill out the form below. We'd love to hear from you!
Also, visit our Knowledge Station for FAQ's plus Tips & Tricks.

Water in Your Fuel? Beware of Trouble Ahead!

Warning signs your diesel is water-contaminated.

Water is the enemy of diesel fuel. It can do serious damage to fuel injectors, help create an environment that promotes microbial growth, and cause rust and corrosion throughout the fuel system. Additives that help remove water from your fuel work in two ways, emulsification and demulsification. But only one way is best. When given the choice between emulsifying or demulsifying, an additive that demulsifies is preferred every time. Emulsifiers allow water to be absorbed into the fuel using alcohol or solvents. Not only is alcohol itself abrasive to your system, but the water, now able to bypass the water separating filters, can potentially cause catastrophic failure of the fuel injectors. The preferred method is demulsification, a process which pushes the water out of the fuel. This method improves the effectiveness of the water separator and is also the favored choice among engine manufacturers. Howes Diesel Defender is the superior additive to demulsify the water in your system and it does so using ZERO alcohol or harmful solvents.

The Water Issue in ULSD 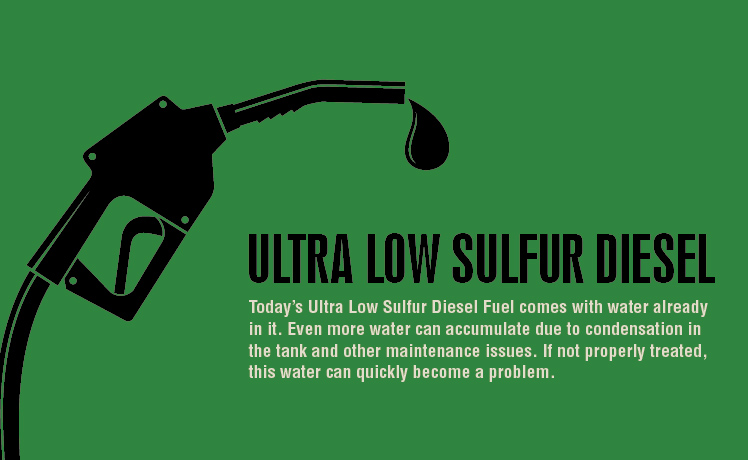 Here are a few samples of the damage water can cause:

RUST – In contact with iron or steel surfaces, water produces iron oxide (rust). Rust particles then get into the fuel and, like other hard particulates, will cause abrasive wear to parts.

ABRASION – Abrasion is the process of wearing down, rubbing away, scuffing, or scratching the parts of your diesel engine. Water has a lower viscosity than diesel, therefor providing less of a lubricating “cushion” between the opposing surfaces of moving parts. The result: increased abrasive wear to key engine components.

CORROSION – Corrosion is one of the most common causes of injector problems. Water combines with acids in the fuel to corrode both ferrous and non-ferrous metals. This is made worse when abrasion exposes fresh metal surfaces that readily corrode.

ETCHING – Etching is caused by water-induced fuel degradation, which produces hydrogen sulfide and sulfuric acid that “eat” metal surfaces such as wristpins, valve tappets, timing chains, and other engine parts.

SPALLING – A fancy term for flaking or peeling, spalling happens when extreme pressure causes water to be forced into to microscopic cracks in metal surfaces. As the pressure continues, the hydrogen released causes the cracks to become larger and creates wear particles that can go on to harm your system.

MICROBIAL GROWTH – Like most living organisms, bacteria and algae need both food and water to survive. If water is present in fuel, microbial growth can occur, creating slimes that foul your diesel fuel and acids that corrode your tank and fuel system. Once microbial growth occurs, it can be difficult and expensive to remove it.

With multiple benefits including increased lubricity, powerful cleaning, and boosted fuel economy, Howes Diesel Defender is also the #1 choice to remove water. Without the use of any alcohol or harmful solvents, Defender demulsifies water out of the fuel leaving only pure fuel to burn, thereby defending your engine against all the nasty damage that water can cause. When you want to keep your vehicle out of the shop and on the road, Defender is the only way to go.